Over the last decade, increased competition for finite patient populations in the U.S. have led many drug developers to expand their search to Canada. The complexity of the science driving today’s cancer therapeutics has also led to highly sophisticated trial designs and rising costs.

Here is the story of one drug developer with a sophisticated Phase III Immuno-Oncology study in Metastatic Renal Cell Carcinoma. It was a global trial that had been ongoing for 14 months, but they had exhausted all options for additional sites in the U.S. and patient recruitment was dwindling. Site scarcity was an issue, but minimizing the logistical complexities associated with fresh tumor sample collection and quick access to leukapheresis labs was of paramount importance.

They already had four sites in Canada but their CRO was unable to find any more, and was recommending they expand to Europe instead. Seems they found it hard to gain traction due to a lack of established relationships with Canadian sites.

It’s hard enough to juggle site selection, contract negotiations, and IRB & regulatory approvals, but without a network of connections to tap into at the site level, it’s almost impossible to meet your timeline objectives. To make matters worse, the Director of Scientific Affairs knew that the average site start-up time for North American oncology trials was over 37 weeks. Their study was already behind schedule and so he needed to tap into a deeper pool of patients and fast!

That’s when he heard about The Reverse Feasibility Program and decided to give us a call. Within 48-hours we had confirmed two sites and soon added six more. The sponsor selected the top five sites to add to the existing four and it took just over nine weeks from the time of IRB Submission to Site Initiation Visit. 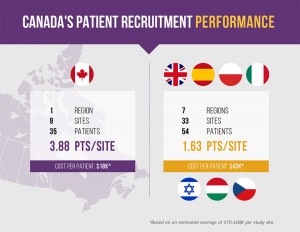 This is another clear example of how sites with study champions are far more likely to accelerate the start-up process and meet recruitment objectives, which is exactly what the Reverse Feasibility Program was designed to do – leverage a pre-qualified network of highly motivated oncology investigators.

Having a trusted partner in Canada helped us tap into high-performing investigative sites. They worked closely with us and have delivered on everything we expected.

Please share this with your colleagues and tell us about your experiences and strategies for accelerating site start-up and meeting patient recruitment targets. For more information on this topic, be sure to download our Free Quick Reference Guide to Accelerating Site Start-Up by 50%.