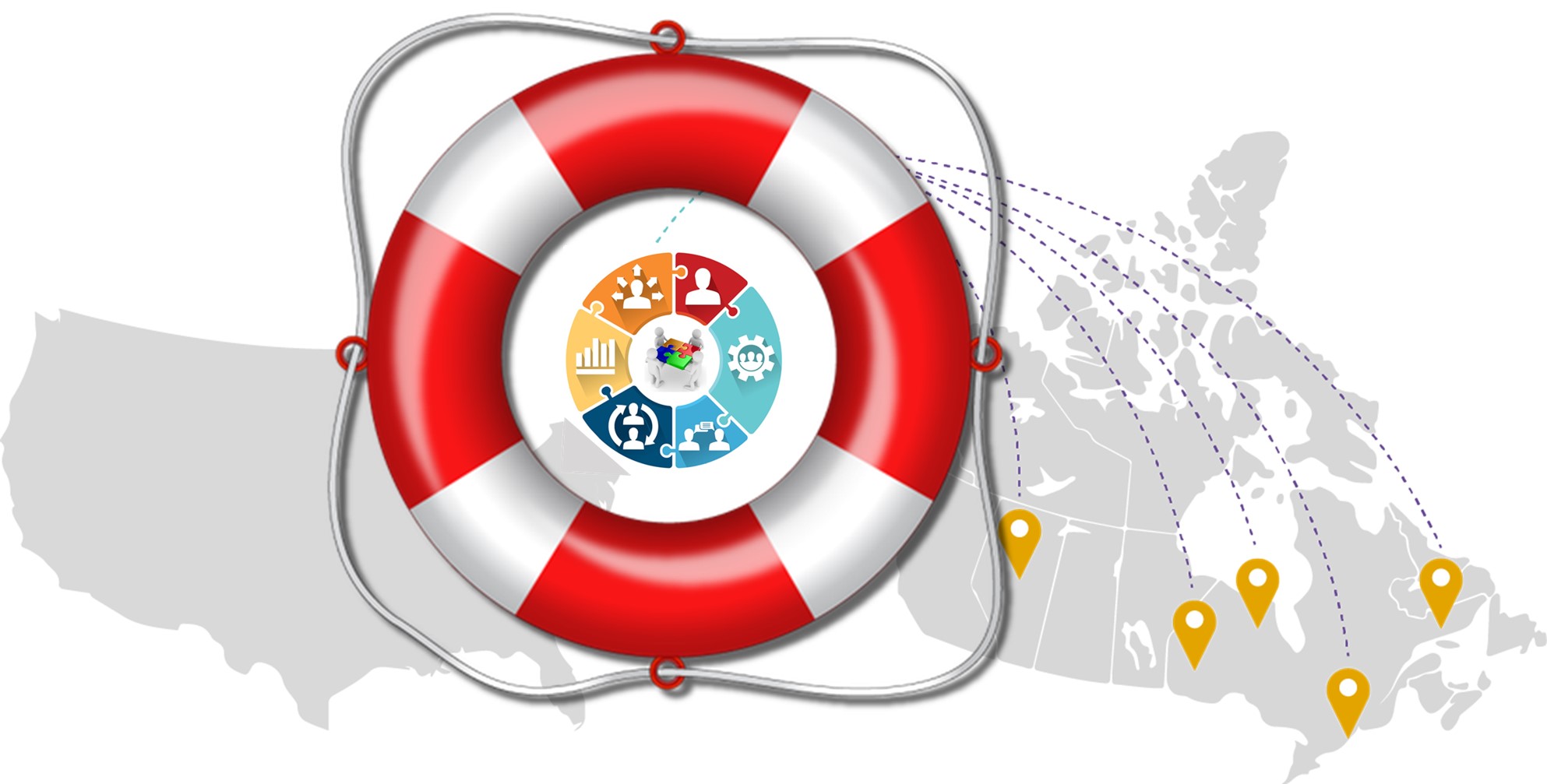 Each clinical study presents unique challenges, and it’s not unusual despite every effort that a clinical trial does not proceed as planned.

“What if the study does not enroll according to corporate timelines?” is one of the top 3 concerns a Sponsor experiences when initiating a new clinical trial, according to PharPoint Research.

What Are the Odds You May Need a Trial Rescue?

This is not surprising as currently 80% of clinical trials fail to meet enrollment timelines and up to 50% of research trial sites enroll one or no patients, according to Cutting Edge Information.  While 72% of studies run more than one month behind schedule. 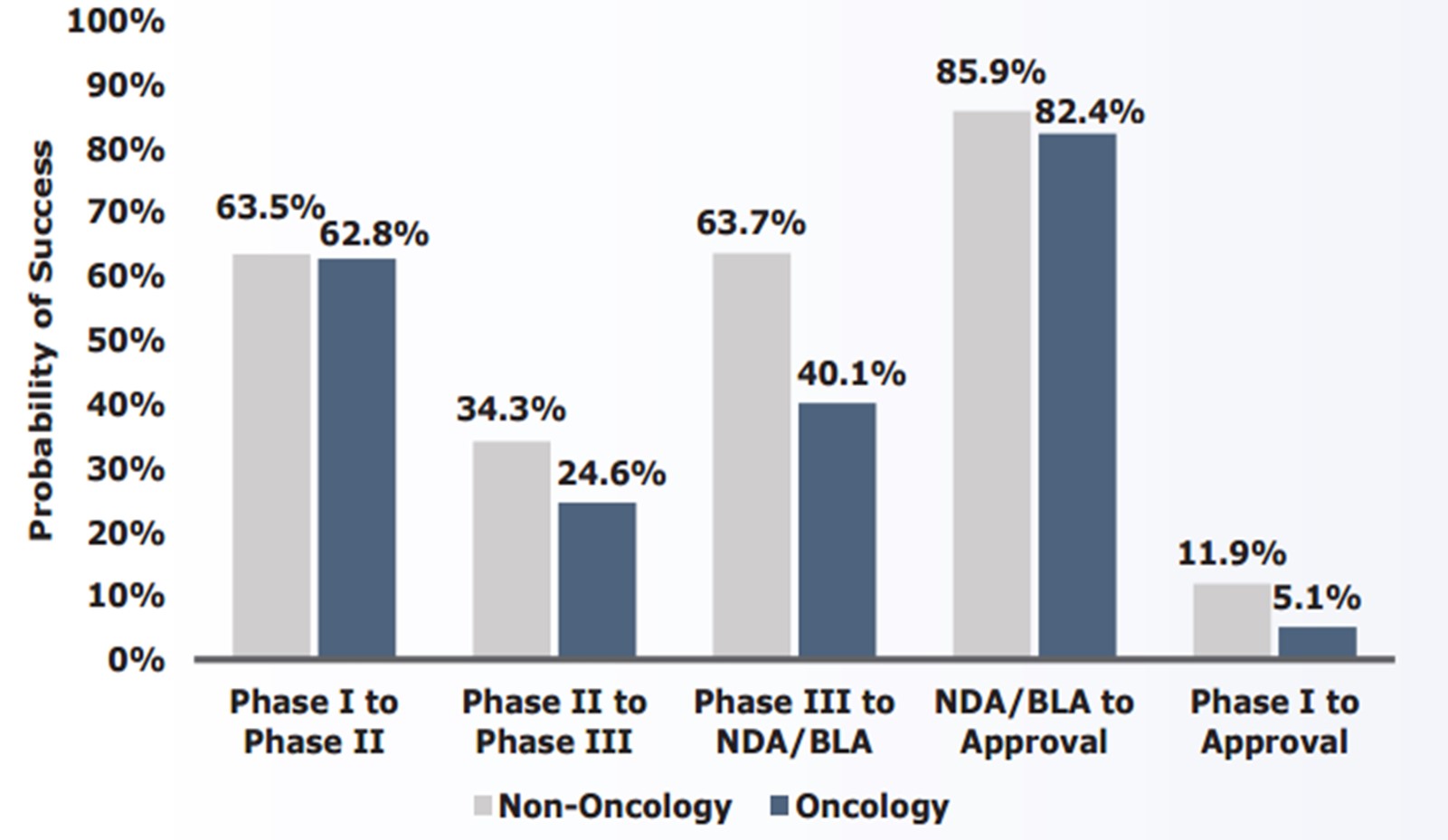 This is exacerbated for oncology clinical trials where the probability of successfully moving a trial from one phase to the next, as compared to non-oncology studies, is lower.  While the overall success of moving a program from phase I through to approval is half as likely for oncology programs.

When problems arise and enrollment is lagging behind expectations a decision to transition a trial is based on two key considerations: (1) enrollment is so far below expectations that the Sponsor considers the trial at risk; and (2) the successful identification of another CRO that has the breadth of skills and capabilities to turn the trial around and deliver within the required specifications.

What Are Your Best Indicators of a Successful Transition Opportunity?

The best indicators of potential success that a Sponsor can work with another CRO to recover a trial are:

One of the biggest fears of Sponsors transitioning a trial is maintaining momentum.  Which is why speed matters. In a rescue situation, there must be appropriate management level oversight and governance.  Careful assessment of the trial and deployment of an experienced and qualified team to help the Sponsor bring the trial back on track.  All undertaken with efficient expediency.

With 20 years unparalleled Canadian oncology experience, 100 successful oncology clinical trials – none of which have ever been rescued by another CRO – U.S. drug developers often turn to Scimega upon realizing program timelines and targets aren’t being met, and marvel at what is then accomplished.  This track record in assisting Sponsors includes clinical trial start-up times 50% faster than the North American average, with trial sites often among top enrollers in global oncology studies.

Real world evidence of service and expertise that is flexible and tailored to rescue a failing trial by transitioning to an experienced and qualified Canadian oncology clinical trial team is highlighted in the following case study.

This geographic expansion to Canada was conducted in a rescue context where the Sponsor had no previous experience in the region. 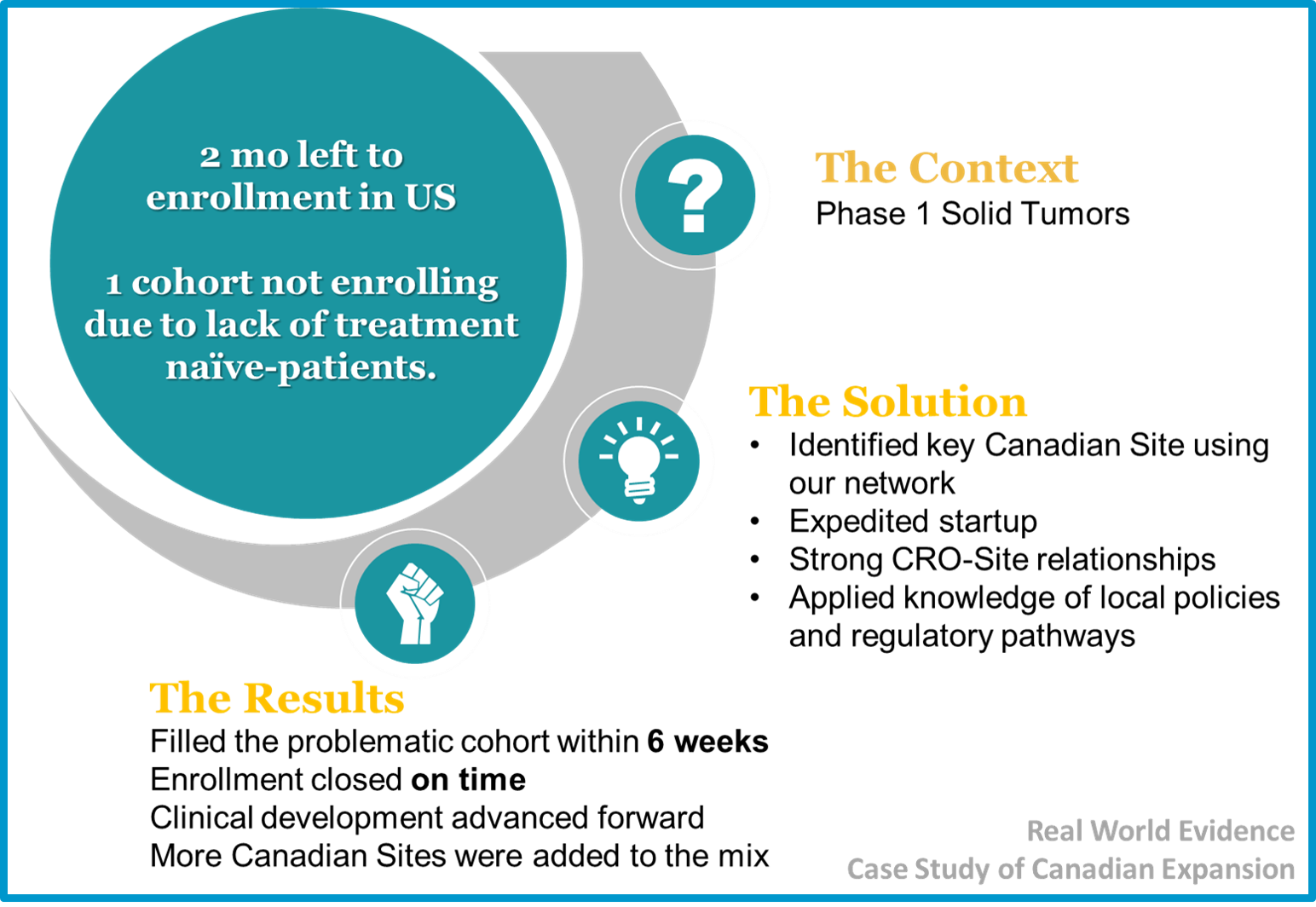 With 2 months left in the Sponsor’s enrollment period, 1 cohort was not enrolling at all at US Sites because it needed treatment-naive patients and it was simply not possible in the reality of the standard of care scene in the US.

The Scimega team of oncology experts reached out to 1 key Canadian Site which they knew had the required treatment-naive patients.  The Primary Investigator was interested because the trial was answering an unmet need for a portion of her patients.

Obviously, start-up was rushed, and because the Scimega team knew the Site very well it was possible to collaborate with the researchers there to open the Site in an expedited fashion.

The outcome of this intervention is that the Site was opened and the problematic cohort was filled within 6 weeks.  The data analysis proceeded as scheduled and the rescue was a success.  Given this successful rescue outcome, as the program progressed to phase 2, the Sponsor kept the Canadian site open and added more Canadian sites to further promote enrollment.

This ability to rescue a failing trial is not the domain of all CROs and is unlikely to simply reflect the size of the organization, but rather an expertise and nimble capacity to provide the most appropriate, tailored solution for the challenge at hand.

Special Report: What’s in Store for Global Clinical Trials in 2022 and Beyond?

Why Not Canada for Your Phase 3 Global Trial Expansion?

Participant diversity in clinical trials can be quite challenging to achieve. With COVID the concern…